OUR PHONES ARE CURRENTLY UNDER REPAIR, WE ARE WORKING HARD TO GET THEM BACK UP AND WORKING PROPERLY, THANK YOU FOR YOUR UNDERSTANDING.
THE CHANTILLY OFFICE IS MOVING! OPENING 1/4/23 OUR NEW ADDRESS IS 13901 METROTECH DR, CHANTILLY, 20151 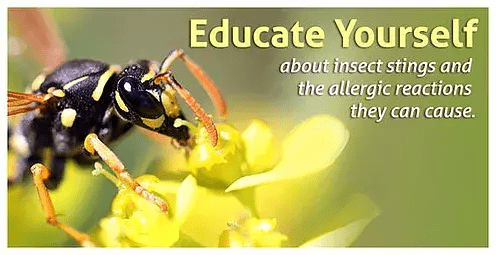 Most of us develop redness and swelling at the site of an insect bite. Yet people who are allergic to stinging insect venom are at risk for a much more serious reaction. This life-threatening reaction is called anaphylaxis (an-a-fi-LAK-sis).

Understanding differences in symptoms between a normal reaction and an allergic reaction can bring peace of mind. It is also important to have an accurate diagnosis so you can manage your condition and be prepared for an emergency.

An allergic reaction occurs when the immune system overreacts to an allergen. In stinging insect allergy, the allergen is venom from a sting. Most serious reactions are caused by five types of insects:

Most people develop pain, redness and swelling at the site of an insect sting. This is a normal reaction that takes place in the area of the bite.

A serious allergic reaction occurs when the immune system gets involved and  overreacts to the venom, causing symptoms in more than one part of the body such as:

Serum sickness is an unusual reaction to a foreign substance in the body that can cause symptoms hours or days after the sting. Symptoms include fever, joint pain, other flu-like symptoms and sometimes hives.

If you think you might be allergic to stinging insects, an accurate diagnosis is essential. An allergist / immunologist has specialized training and skills in determining the cause of your symptoms. Your allergist will conduct a thorough health history followed by allergy testing to determine what, if any, allergens put you at risk for serious reactions to stinging insects.