OFFICES CLOSED: ALL LOCATIONS WILL BE CLOSED MONDAY, MAY 30, 2022. HAPPY MEMORIAL DAY!
Face Masks are still REQUIRED in all offices regardless of vaccination status, this includes SHOT PATIENTS. Thank you!

Allergy and Asthma Specialists of Greater Washington Our Services Allergy

If you suffer from allergies you know the symptoms can disrupt your normal activities and make you feel miserable. The expert allergists and immunologists at Allergy and Asthma Specialists of Greater Washington, with offices in Fairfax, Gainesville, Vienna, Warrenton, Culpeper, Tysons, and Front Royal, Virginia, can help you manage your symptoms and maintain your normal active life all year. Call or schedule an appointment online today.

What is an allergy?

Allergy is an abnormal immune response of the body to normally harmless substances such as pollens, dust, animals, food, insects, and medications.

Our bodies are programmed to keep us protected from harmful foreign invaders such as bacteria and viruses. Our immune system makes soldiers called antibodies to fight off these organisms not only during the first exposure but also subsequent ones 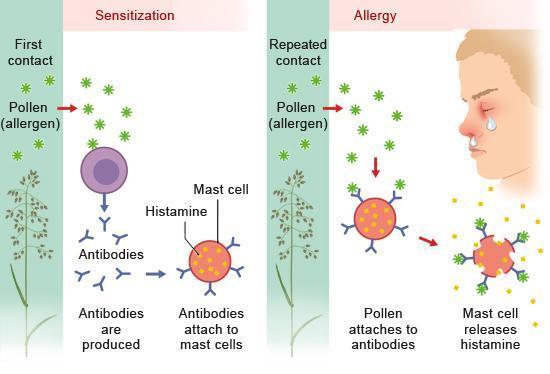 In an allergic response, the body thinks normally harmless substances (such as pollen, dust, molds, animal dander) are its enemy. The body responds by making immunoglobulin E (IgE) antibodies; this sets off a chain reaction that ultimately leads to the release of molecules to fight off the imagined enemy.

For example if you have pollen allergy, within seconds to minutes of breathing pollen into your nose, the soldiers (IgE) made against the particular pollen recognize it and activate certain cells in your body to release molecules, including histamine, which can cause symptoms such as nasal congestion, runny nose, sneezing, and coughing, in order to help eliminate the pollen from your body. These symptoms can cause a marked degree of discomfort.

How can allergies be diagnosed?

The only two scientifically validated allergy tests available are skin tests and specific blood tests. Our providers are experts in helping to select and in interpreting the appropriate tests for various allergy conditions. In addition, they offer expert advice on a treatment management plan.